Blog for restaurants and gastronomic entrepreneurs 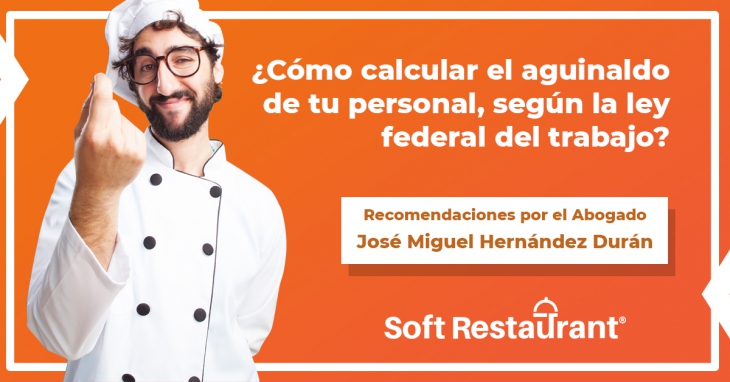 How to calculate the bonus for your staff, according to federal labor law.

The month of December is approaching and with it, the obligation to pay one of the benefits established in the Federal Labor Law, the Christmas bonus, which must be covered before December 20 of each year and consists of a payment of when less 15 days of salary (for those who have completed one year of service).

Here we share with you some of the most common inquiries we receive from our clients in the hospitality industry.

Can I agree on a different date of payment of the Christmas bonus with the worker?

Yes, as long as it is advanced, however, we suggest that it must be covered in its entirety no later than December 20, some companies choose to divide it, delivering a part in December and another in January, but beware, to receive an inspection of the STPS and not verifying that the benefit was covered, a fine may be imposed.

I hired the worker already started this year, how do I get the bonus?

We have the obligation to pay the worker the corresponding proportional part, according to the time they have worked, whatever this may be (even if they started working a few days before December 20), let's see the following example:

The worker must receive $ 493.15 pesos as a proportional bonus.

I hired people for fees or another scheme that is not the worker, do they receive a bonus?

If the person covers a work schedule, receives instructions from a boss and provides services on a permanent basis, he is considered a worker, regardless of the name given to the contract that has been concluded.

My worker is about to end his employment relationship in the next few days, can I pay him until December 20?

It is recommended that at any time the relationship with a worker is terminated, the proportional amount of the bonus be covered.

My worker is hired by outsourcing, should I observe any recommendations?

It is very important to ensure that outsourcing pays this benefit on time, because if it does not do so, the beneficiary of the work will be obliged to cover it, this happens not only with this, but also with other benefits and obligations that they have with the workers, , in the case of compensation.

I want to give an additional bonus to the Christmas bonus, what is recommended?

Many times the additional bonuses are based on the performance of the worker in the year, the profits that the business has had or simply because you want to reward him, however, we recommend that you exercise caution in how these "incentives" are given because when doing so periodically and continuously (every year), they can be considered as benefits that are part of the salary, that is, if we had a legal contingency due to a labor demand, it is very likely that this bonus will be considered as part of the salary, resulting in it being integrated into the salary and thereby increase the amount to which we could be sentenced to pay compensation.

I have workers who I pay for commissions

In this case, for the salary to be taken into account, the income received in the last year of work or the proportional one should be averaged in case the year has not been completed.

Some of my workers are hired seasonally, is this benefit applicable?

One of the peculiarities of seasonal hiring is that workers do not provide their services throughout the year, so they must be paid a bonus corresponding to the part proportional to the time worked, that is, only the days will be taken into account in which they lent their work.

What happens if I don't pay on time?

In the months of January and February, the Federal and Local Labor Inspectorate carries out random inspection operations to companies to check that this benefit has been complied with in a timely manner, as workers do not receive the bonus on time, they can Report even by telephone to the Procuradurías para la Defensa del Trabajo and these in turn will send extraordinary inspections at any time to the companies, being able to impose fines ranging from $ 4,000 to $ 400,000 pesos even for each worker in whom the lack.

We recommend that this service is always correctly documented with the appropriate receipts, do not wait to have a legal problem, if you have any particular questions, contact us at This e-mail address is being protected from spambots. You need JavaScript enabled to view it.